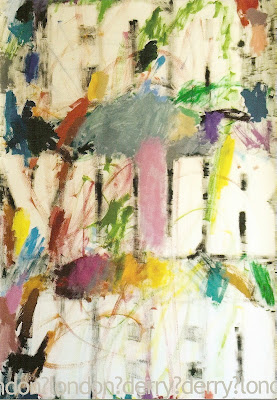 The project Derry London grew out of a discussion regarding a painting made in 1988, A grey stained raw canvas affair with the text Derry – London, painted in capitals at either side of the canvas, like an exploded cartography that mapped a nonsite, of neither Irish or English.

The choice to leave the homeland and to opt for a sense of exiled exclusion within London. An `ideality` of not belonging as an option in a landscape of entrenched identities. The use of London St. as a locus for this series of exhibitions could be mirrored in Derry St. in west London, the link built into the streets of both places. The post agreement landscape now serves to protect both identities via the relinquishment of the politics of antagonism towards the politics of inclusion and difference. The eventual recognition of difference within citizenship marks a move to a normalized society, that works on various social contracts that allow us as subjects to form our worlds, be they collective or individualistic.

It is this landscape of the social contract and the psychological spaces these allow us to create that Anna Boyle works with in Derry London. Text derived from the contacts offered tend towards a guarantee of met needs or the need for recipients of services offered. `We will` is a floral tribute made of thousands of hand crafted paper flowers points to a positive wilful `yes` whose real direction is left open, funereal in its delivery the statements positivity is underwritten in the manner of a memorial.
This language of flowers is an immediate reference to the so many floral tributes that adorn the main public space in London St., namely the Cathedral. The collective identity is at once attributable to the specificity of religious identity rather than the secular contracts offered in the other works.
I had originally started with the text “individual conduct” our conduct, the idea of how we take part in civil society which brought me on to contracts of kinds I mentioned before and I started to think of Londonderry or Derry London as a kind of contract of identities and I guess trying to negotiate these identities within the workings of social contracts and also exploring the idea of a “communal shelter” with these statements, what we rely on as groups of people, our identities, traditions, religious, cultural etc, and the more modern plastic offers from commercial industry. There’s an element of memorial about the work large affirmations, but also they are a form of protest rejecting clienthood, dependency, and coded relationships, searching for human space.` The inclusivity that now so underwrites the new political cartography of NI is that which permeates the larger social landscape as subjects within global capitalism, “we need you, for our need” marks out the requirement of both producers and consumers alike, as both are now intrinsically one as subjects now enter the shop floor of world making, cooperation now leads us towards the production of common goods which in turn can produce new and unique lines of flight for the subject and the socious, allowing for the continual recreation of our world as product of our imaginings.
Damien Duffy, 2008
Anna Boyle, currently living and working in Dublin, studied at N.C.A.D Dublin 1997-2001 BA Art and Design Education, and a MFA in 2001-2003 at University of Ulster, Belfast.