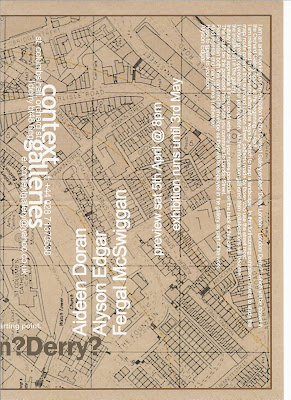 Context Galleries
presents
Aideen Doran
Alyson Edgar
Fergal McSwiggan
Curated by Emma Donaldson
Derry? London? London? Derry?
Opening 8pm Saturday 5th April 2008
The Exhibition will run until 3rd May 2008
Aideen Doran
Two cities built upon a stratified clutter of histories... like Leonias rubbish, the boundaries between these places uncertain, shifting, threatening an avalanche. An unstable line, drawn from the centre (London) to the periphery (Derry)- a fragmenting sense of place- London Street, on the margin of the walled city. Drawing/ erasing/ over-writing/ re-drawing/ recovering/ constructing...The linear time of labour involved in these processes condenses into seconds of film, looping and folding back upon its volume. Entropy parallels renewal. Macro/micro histories, local/national scales conflated. Provisional monuments, provided for uncertain places.Representing the space - constructing a removal from itThe hand-made, hand drawn suggest vernacular means of managing the politics of space, translating these histories into the everyday life, the invisible into the visible.Ordering/ mapping/ describing/ navigating...These complex relationships become a web of information, collapsing under its own gravity.

Aideen Doran graduated from the University of Ulster, Belfast in 2007. Previous shows include RDS Student Art Awards, Dublin (2006), Heal, Naughton Gallery, Belfast (2007) and EV+A 2008; Too Early for Vacation, Limerick. She currently lives in Belfast, working at Flax Art Studios as part of their Graduating Student Residency programme.
Alyson Edgar
I am an artist working on an exhibition for the Context Gallery entitled “Derry/ London – London/ Derry?”, which will be shown in the Orchard Gallery space at the beginning on April.
I am interested in discovering alternative ways by which to map a landscape. In this forthcoming exhibition I intend to study the map/ route patterns that surround London Street, patterns made by those who use the street most.
I would greatly appreciate your participation. All the information gathered from collaborations will become the installed art in the gallery.
Initially I would appreciate it if you could write only your home postcode on the back of this card. This would be the postcode from which you commute to London Street. Please retain both this card and its envelope as they will be displayed in the gallery as part of the work.
Kind regards and many thanks in advance!
Hope to speak to you soon,
Alyson Edgar.
edgar.a@hotmail.co.uk
07980553343


Born in Belfast, N. Ireland Alyson Edgar creates work that focuses on the visualisation and cartographic documentation of journeys.
Unfamiliar landscapes are logged and archived in an interactive and collaborative manner, utilising elements of serendipity and voyeurism.
Her work is presented in a structured pseudo-scientific format cataloguing the events of each investigation.

Why go outside? What is there to do? Public spaces in Northern Ireland. Rural, urban and suburban. How they are occupied, how they are abandoned, how they are desirable and undesirable. Public interaction with self and environment. London St in Derry/Londonderry, Gerry/Londongerry. What do we do now with our open spaces, on a Saturday night in Belfast or Derry, or on a Wednesday afternoon in Omagh or Strabane? Open public spaces were used for many different activities during the troubles, what are they used for now? A walk through the Lagan Meadows, or a walk along the Derry walls. A drive through the South Sperrins scenic route, or through the North-West Passage. Camping out in Belvoir Park, or camping on London street. Walking the Ulster Wayward.

Fergal McSwiggan lives in Belfast and works and recreates here and all over Ireland. Originally from Omagh, County Tyrone, his work is concerned with issues of communication, place and identity, tourism and recreation, as well as rural and urban public space in post-conflict Northern Ireland. He is interested in the misrepresented visual culture of Northern Ireland, and how it was in the past, often seen as urban and violent, when it is predominantly pastoral and peaceful.
Posted by context gallery at Thursday, April 03, 2008