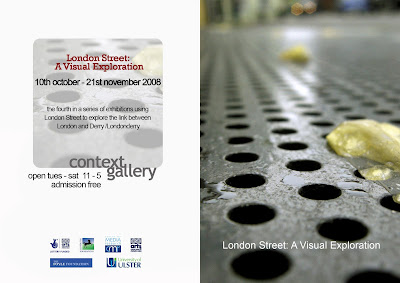 London Street is a Georgian street steeped in history and located in the centre of Derry City, shadowed by the historic city walls. This was the creative springboard for each of these new visual projects.
Together these projects offer the viewer a stimulating and thought-provoking journey through a number of virtual London Streets.
These three art projects have been created as part of a novel collaboration between academic staff, located within the School of Media, Film and Journalism at the University of Ulster and emerging artists who have a close connection to the School.
Two of these young artists are recent graduates, one is currently studying for an MA in Documentary Practice and one was based in the School’s Centre for Media Research.
This staff ‘student’ collaboration worked in different ways whereby academics help forge a productive relationship between theory and practice and the emerging artists help such ideas grow creatively, culminating in the works produced for this show.
Sarah Edge, Curator

ANNE CRILLY with VINCENT O'CALLAGHAN:
London Street: Surrender
This video installation explores Derry as the Maiden City. London St, within the city walls and in the shadow of St Columb’s Cathedral, projects an aura of respectability yet, just around the corner, behind the elegant facades of Pump Street, is a hidden history of women which can be explored. 4 Pump Street was, in a past life, a brothel serving the respectable elders of the city. Today, ‘Pathways’ at the other end of Pump Street, is the education and outreach department of Foyle Women’s Aid which offers support and education for victims of domestic violence. Anne Crilly and Vincent O’Callaghan’s audio-visual investigation of ‘London Street- Surrender’ explores issues surrounding the historical and contemporary control and surrender of women.

SARAH EDGE with ROWAN MORREY and SHELLY GARRETT: Interactive walkthrough- Path to the Portal, an Interactive Diorama
London Street is a path, a journey in itself, to one of the city’s gates. Photographs themselves are gates into our memories; to our own journeys long since passed, soon to be revisited. Sound is the ‘music’ without which a walk down the street would seem unreal and even disturbing and unnatural. This work combines these elements in Adobe/Macromedia Flash to allow the viewer to create their own paths to the portals along London Street.
The project is a myriad of still photos, compiled in Flash, mapping the path through London Street and out to Butcher’s Gate. Still images shot at intervals along the street provide the viewer with a more revealing and textured feel to the project. Shot in monochromatic as well as in colour the user can walk the street using the keyboard and enter the many “gates” or “portals” of the buildings along the journey, peeling back the historic skin to find the blood of modern life and commercialism alive and well in this historic setting. This is combined with audio that captures the modernity of the atmosphere belying the historic nature of the buildings which in turn, mask the businesses and companies that operate from within.

GAIL BAYLIS with ANNE BURKE: Photographic installation, History begins at ground level, with footsteps
How can we understand the materiality of London Street, a street still encountered primarily by the experience of the pedestrian? Michel De Certeau's theorization of the city gaze affords one inroad into engaging with the particularities and characteristics of this street. This work speaks not only of the street's material identity but also its past. Street directories afford a means to access this history at ground level - they reference the city through the trades and professions to be found in its streets. However, the written record alone, while offering a means into the experience of London Street, cannot articulate the visual register of the experience of walking that street. For this we need to pay attention to the coordinates of the street gaze.
This installation does not aim to define but, rather, it registers the inherent transience in the street gaze. That gaze is resistant to definition and to capture by the camera. It is fleeting, mobile, diffused; has passed in the moment of its recording. It is a subversive practice - oppositional to the aerial gaze wherein distance serves to render movement as containable and static and in which the camera operates as a means for surveillance.