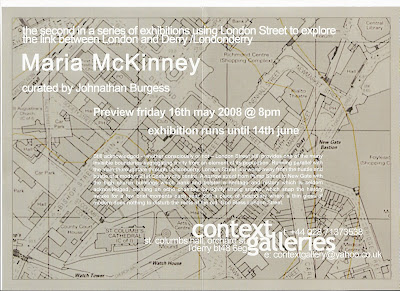 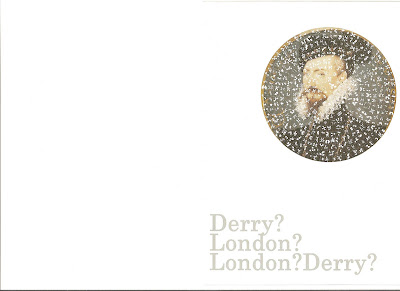 Still acknowledged - whether consciously or not - London Street still provides one of the many invisible boundaries segregating a city from an element of it's population. Running parallel with the4 main thoroughfare through Londonderry, London street is a world away from the hustle and bustle of a modern 21st Century city centre. A narrow street from pump Street to New gate with the high church buildings which bank and bolster a heritage and history which is seldom acknowledged, creating an echo chamber for tightly strung snares, which snap the history awake for a few brief moments each year. Still a place of incendiary where a thin gloss of modern does nothing to disturb the roots of the old. God bless london Street. Jonathan Burgess

The place London St. alludes to the idea of a centre and a periphery while also marking the extension of an empire. A namesake will extend a lineage and prolong its longevity as a people, place or establishment. The nucleus is where power resides. It has an aspirational position in relation to its outer regions. For this exhibition McKinney will produce a series of drawings and sculptures. her work explores subjects of boredom and activities used to pass the time, echoing the nature of their objective.

Since graduating from the University of Ulster in 2005, Maria McKinney has exhibited at both a national and international level including the National gallery of Ireland, the RHA and RDS Dublin; Golden Thread Gallery and Old Museum Arts Centre, Belfast; Crawford Municipal Art Gallery, Cork and Sligo Gallery of Art. She also exhibited in Resolutions at the Katzen Arts Centre in association with the Smithsonian Institute, washington and the 411 gallery in Shanghai, China. Her work is included in the Office of Public Works, Bank of Ireland and private collections. Her practice includes drawing, sculpture, installation and intervention. She is currently a member of Orchid Studios.
Posted by context gallery at Tuesday, May 13, 2008